skip to main | skip to sidebar


Here's a nice article by Keshav Srivaths, a participant at the AIM For Seva Global Youth Leadership Program in 2015:

Posted by Chandrasekar Raghu at 5:49 PM No comments: 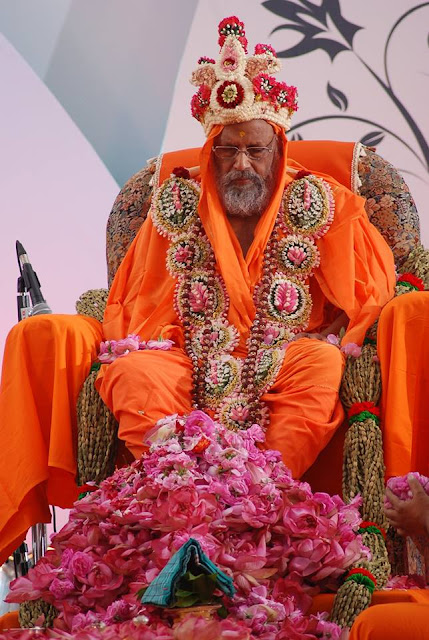 dayänandarüpam madäcäryameede
दयानन्दरूपं मदाचार्यमीडे
(I worship my Guru Swami Dayananda Saraswati who is an embodiment of Compassion and Ananda)
Pujya Swamiji Dayaananda Saraswati was a visionary, thinker, humanitarian, author, composer, and one of the foremost authorities of Vedanta of our times. This event will feature presentation of Swamiji's life, tributes to Swamiji by Houston community leaders and vocal and dance recital of Swamiji’s compositions.

Posted by Chandrasekar Raghu at 8:34 AM No comments:

The AIM For Seva Houston Chapter Volunteers would like your valuable feedback and encouragement!

While new pledges and donations are still coming in and hence we don't know the final figures yet, as of now, we raised $122,771 for educating the under-privileged children of India, thanks to your kindness and generosity!

Article from the Indo-American News

Posted by Chandrasekar Raghu at 7:44 AM No comments:

SUNDARA KAANDAM raises $ 121 K in Houston for the rural kids of India !

AIM For Seva gets the coveted 4-STAR Charity Rating !

Which other city in the USA will be hosting Sundara Kaandam in 2015?
Sending a Personal Check for your Contribution? 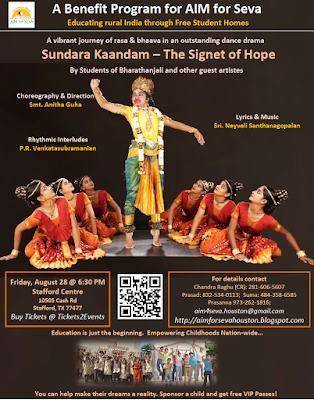 Posted by Chandrasekar Raghu at 2:07 PM No comments:

It's never too late to donate to AIM For Seva!
For online secure donation, please click here.
Photos from Houston event on Saturday, September 6, 2014 are here!

Kalidasa, the poet of all poets, wrote Meghadootam, centuries ago. It was a love letter from a man separated and far away from his wife.

Meghadootam, the cloud messenger passed through the Houston area and made a short stop at Stafford Center on Sept. 6.

The All India Movement for Sewa, an integrated community development program reaching out to rural and tribal children across 15 Indian states, founded by Swami Dayananda Saraswati of Arsha Vidya Gurukulam, presented the classic as a fundraiser.

The Cleveland Cultural Alliance produced the ballet, with music by Bombay Jayashri Ramnath, while Shijith Nambiar and Parvathy Menon provided the script and choreography.

The very title, Meghadootam, triggers one’s imagination in this age of “Cloud computing” as if Kalidasa had presaged the use of clouds as a mode of communication. The poet’s imagination seems to have aptly portended the futuristic science.

Leaving the science apart, how the clouds, constantly moving, fickle phenomenon of nature, can be captured on stage by humans and captivate the audience is a valid question.

Kalidasa’s unparalleled poetic prowess and his lyrics imbued with thoughts and emotions, of the plants, the animals and the humans, already accomplished this ardent task, but how the artists would depict the clouds remained an enigma, until they actually did it.

A Yaksha, a divine attendant, displeases his master, Kubera, and he is exiled to the wild forests of central India. As the Yaksha pines for his wife, who remains in Alaka, their home in the mountains, he could have used a smart pone, landline, Internet, even a pony express or a dove to send his message, but he could not as the gadgets were non-existent in the age of Kalidasa. That did not deter the poet. He calls upon the cloud to carry the message.

Kalidasa’s love-lorn hero transcends the emotions of love and describes the nature, the landscape that the cloud would traverse in its journey, day and night.

The persistent imagery and the protagonist of the play, the cloud, could we say, stole the thunder, as the artists recreated the clouds in a myriad veils, waving and weaving all over the stage, and with the dynamic artists up and down the landscape.

The deliberate use of silky, white veils symbolized the clouds in abundance and convincingly so. Should you feel that the veils were overwhelming or used in excess, maybe the imagery of cloud, clouded your imagination. The artists may be allowed this stage excess as a poetic license.

The supple vines of the lady love, the glances compared to a startled doe, the tresses similar to the peacock’s plumage, the ripples of water and the fallen dried leaves in the river Sindhu, resembling the emaciated form of the Yakshi, later the swans dancing in the rain, flowers blooming and rejoicing, city dwellers performing Siva Pooja in a celebration, the clouds forming a rainbow after the rain and inviting the peacocks and deers in the forest to dance, and finally, the two souls uniting, at least in the imagination of the Yaksha, through the clouds as love sustained their souls, the cloud completed its task successfully as a messenger.

It was a dramatic challenge to depict the swans, peacocks, deers, blooming flowers and so on, and the dancers ably did it all.

Shijith Nambiar and Pavithra Srinivasan as the lead dancers lifted the whole performance to great heights, wherever the cloud could reach, including “cloud nine.” 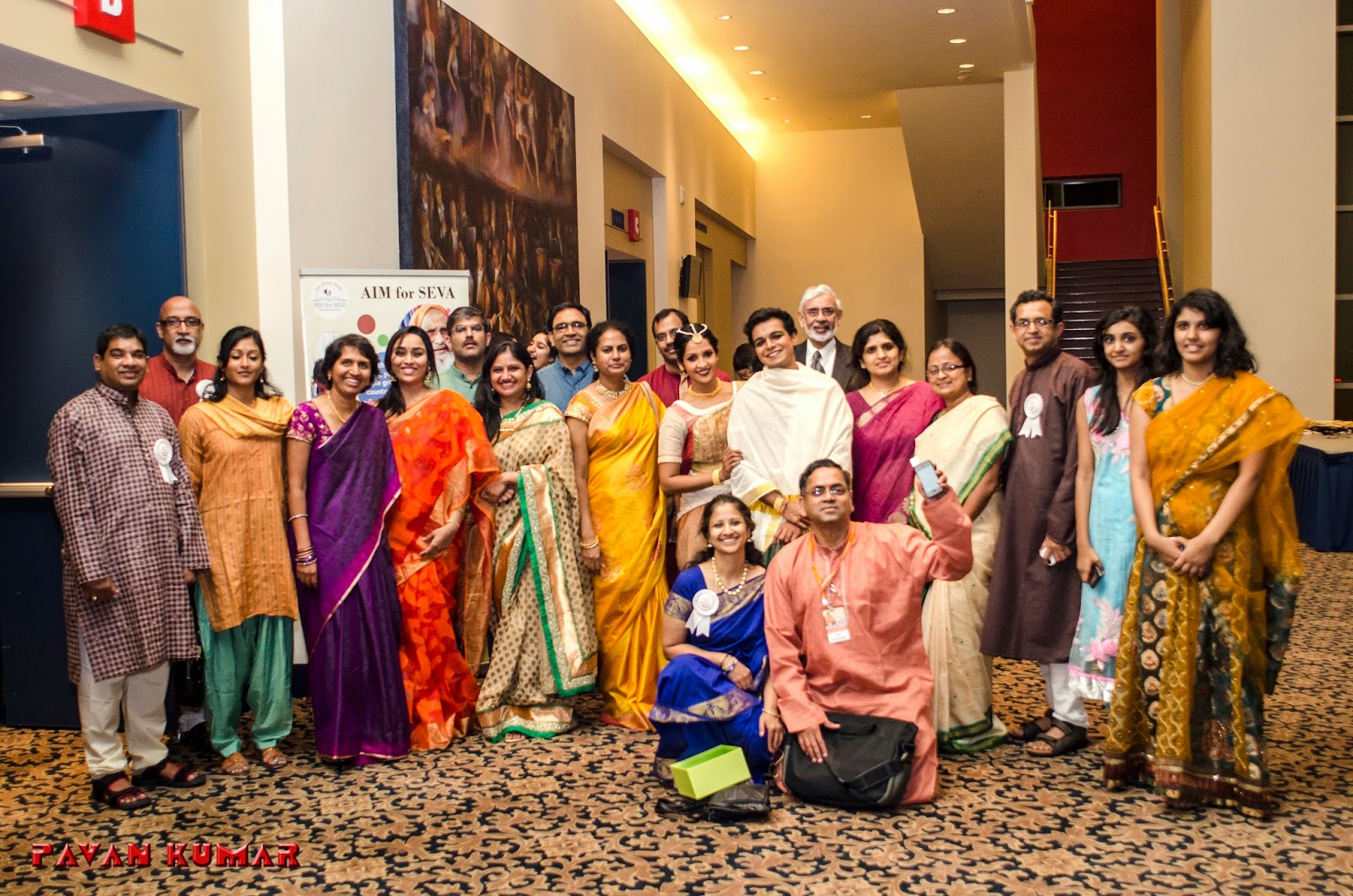 Posted by Chandrasekar Raghu at 7:29 AM No comments: